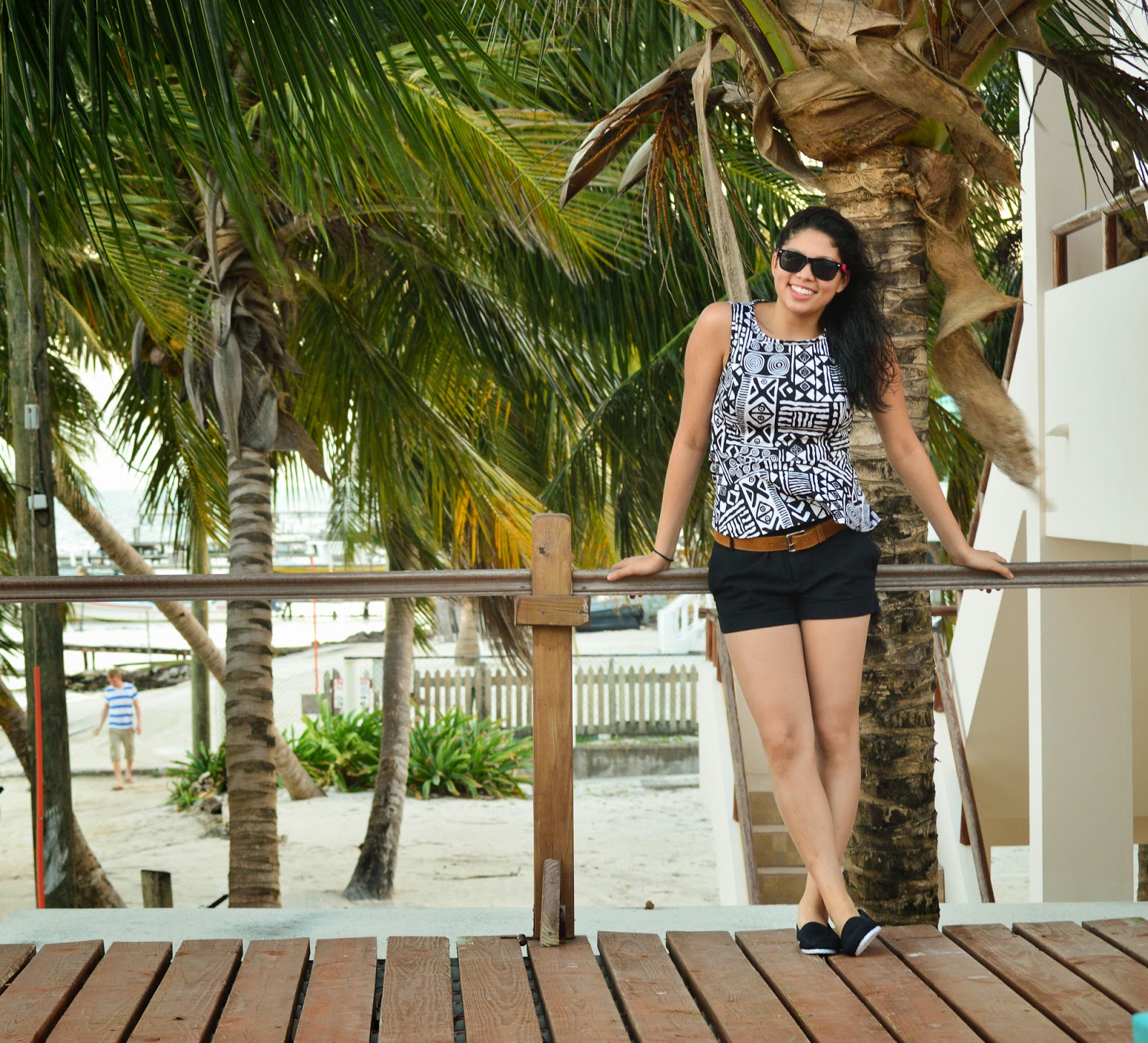 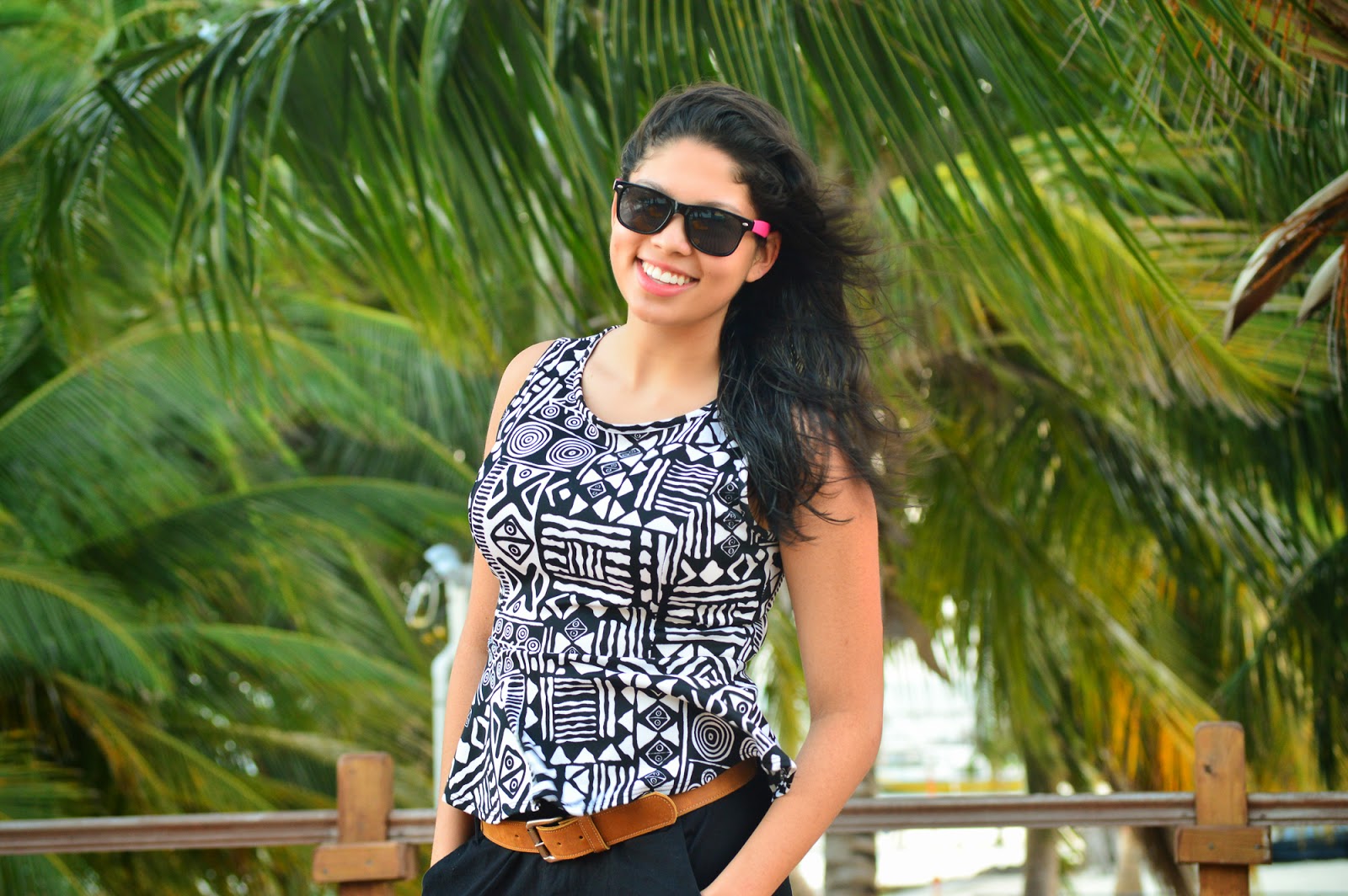 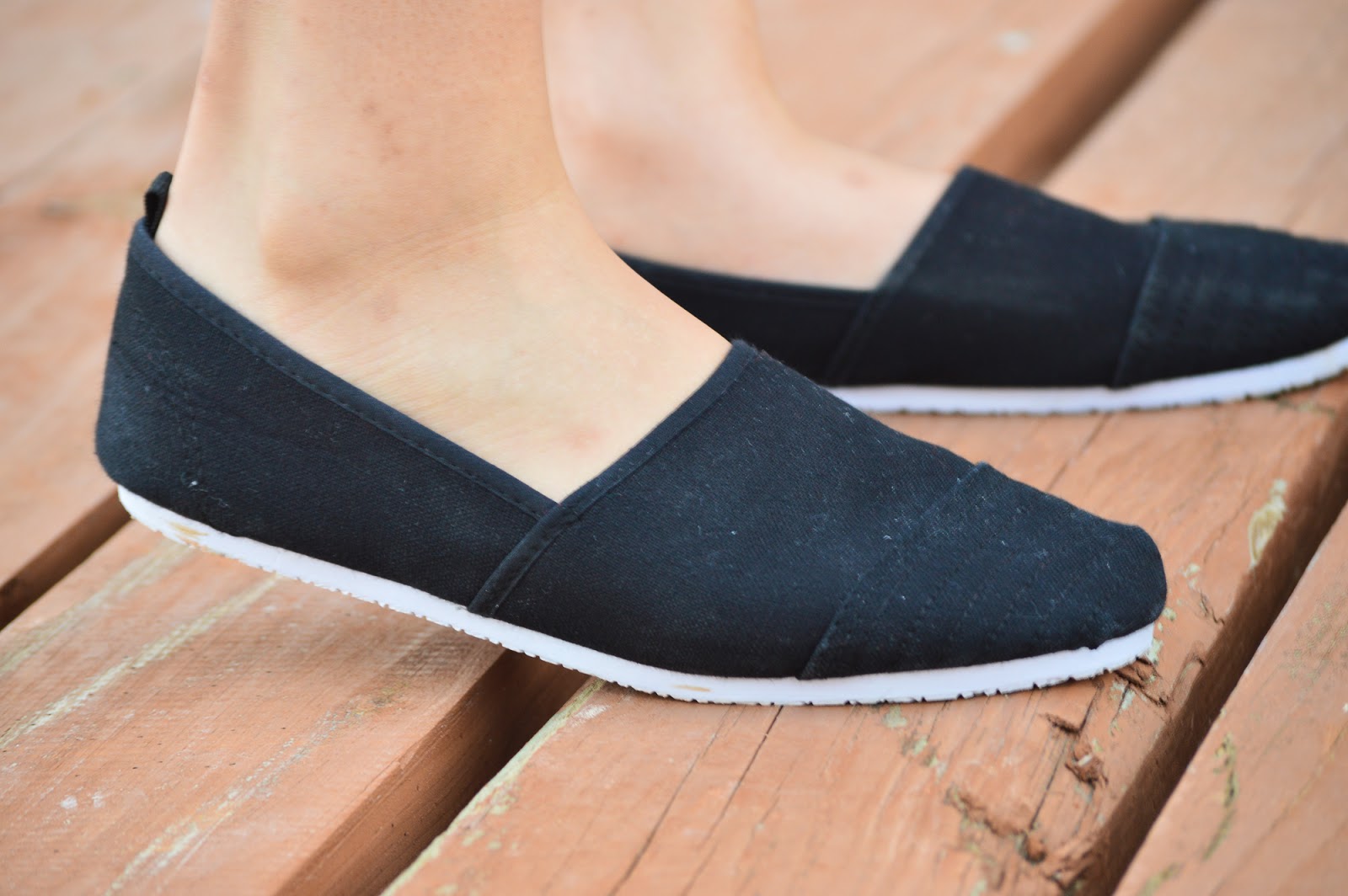 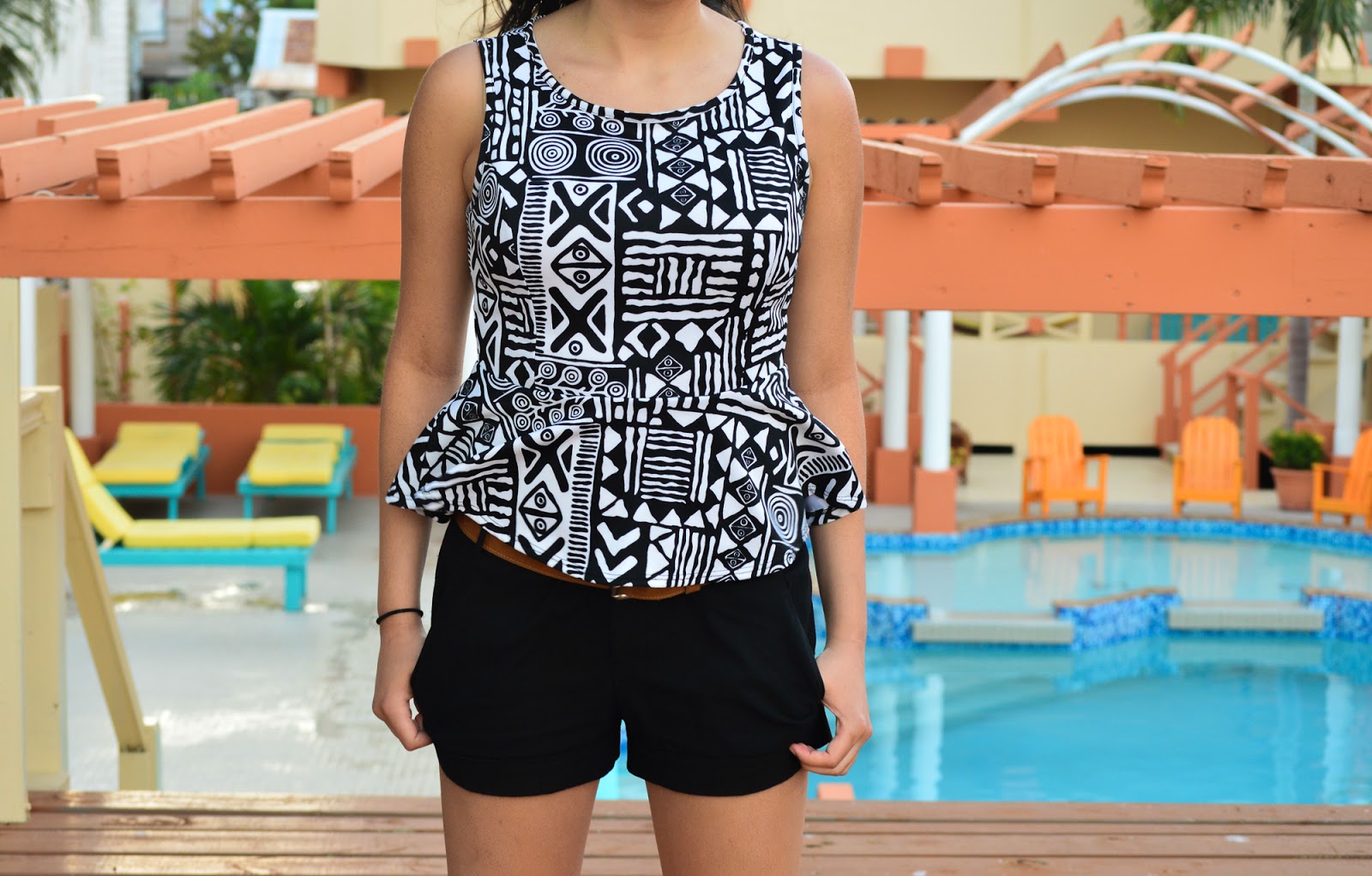 
Well it's actually what my sister was wearing one night for dinner when we were in Caye Caulker, Belize. I saw her super cute tribal peplum shirt and asked if she'd step in front of the camera for this edition of What I'm Wearing.

This Forever 21 tank top is great for travel because it has a cute and flirty cut while still having a modest neckline. Loose black linen shorts and comfy canvas shoes complete this casual outfit. Oh yeah and remember that post I wrote about StashBelt money belts for travel? Here's the belt in action looking pretty sleek if I do say so myself.

Are you still liking peplum tops this season? I think tribal prints are going to be huge this summer as well.

Have You Ever Taken a Career Break? 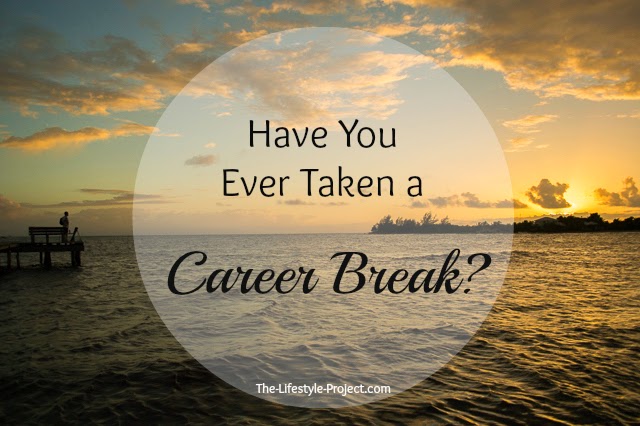 Taking three months to travel around Central America travel was such an adventure, but after quitting my job last year, I also viewed my trip as a career break -- a time for me to figure out what I wanted to do next with my life. I spent the first few months of 2014 reading, taking in a lot of information, and figuring out the direction in which I wanted to go next. At 27 years old, though, taking a break when everyone else my age seems to be taking off is a bit out of the norm. But a career break coupled with a backpacking jaunt climbing Mayan ruins and swimming with sharks?? Carpe diem right?

For me, I used my career break so I could slow down and take some time to:
The Happiness Project and The Four Hour Work Week were two books that really struck a chord with me because of the way they made me think of lifestyle redesign. Now my brain throws around terms like location independent, passive income, and multiple streams of revenue.

Failing at Stand Up Paddle Boarding

The past few years in Canada I lived close to the Ottawa River, a calm stretch of water that cut through the capital city. Sometimes in the evenings I'd take walks along the banks (or do outfit photo shoots) and see an increasing amount of people stand up paddle boarding.

"What is the point in standing up on a surfboard and slowly paddling yourself up and down the river? God forbid the water is even lightly choppy. There's no adrenaline rush at the end or any real reward, not to mention it looks a little dumb," I'd say to myself. Obviously I did not hold this activity in high regard.

Rewind to the day I tried stand up paddle boarding for myself and got my ass handed to me.

The Last of the Beach Days

It’s the last of the beach days for a couple of months at least. I’m on the Caribbean coast of Panama in Bocas del Toro (Isla Bastimentos specifically) and thinking isn’t it funny that sometimes you really do have to say goodbye to a place (or person) to get perspective on how good (or bad) it really was.

I’m trying to stay in the moment and take a lot of quiet time to myself since I’ve been alone. I try to blog often but the internet is slow and unreliable in this part of the world so I’m not online regularly. Instead I write down my thoughts and feelings the old fashioned way and transcribe them when I have the chance. I get the satisfaction out of privately journaling but I’ve also been missing blogging and being able to connect with others in real time.

In a few days I’ll be continuing the second part of this travelling adventure and I think it’s coming at just the right time. I’ll be settling into Tennessee for four months or so, living with my husband again (yay!!!!) and getting to spend some time with my in-laws. Because we’ve always lived so far apart I don’t know them as well as I’d like to, but that will change and I’ll be living in their garage apartment for the summer and getting to experience some southern American culture. Fishing, shooting, cowboys, and country music are calling my name…

That’s the blog post I typed into my iPod just minutes before my backpack was stolen on the beach in Panama. It’s partly why I wasn’t vigilant enough about what was going on around me as I was still engrossed in my thoughts. I forgot that I wrote in actually since I got so swept up in everything that came after.

It’s been a few weeks since the theft went down and nothing has come from it. I met with the teenage suspect and his aunt who vehemently denied having anything to do with stealing my things. I offered to drop the charges if the kid brought back my memory card but sadly I haven’t seen it (or him) since and know that the photos are gone forever. The police on the island were a complete joke and did absolutely nothing to help me. Locals, in fact, were the ones who identified the boy and were so apologetic and angry for me as word got around town.

After accepting that my things would never be returned to me I thanked those who had helped me and got the hell outta dodge. I took an overnight bus to Panama City where I’d be flying out of the city five days later.
Click here to read more >>
13 comments:
Labels: lifestyle, travel, travel style

I'm A Statistic: Getting Robbed in Panama 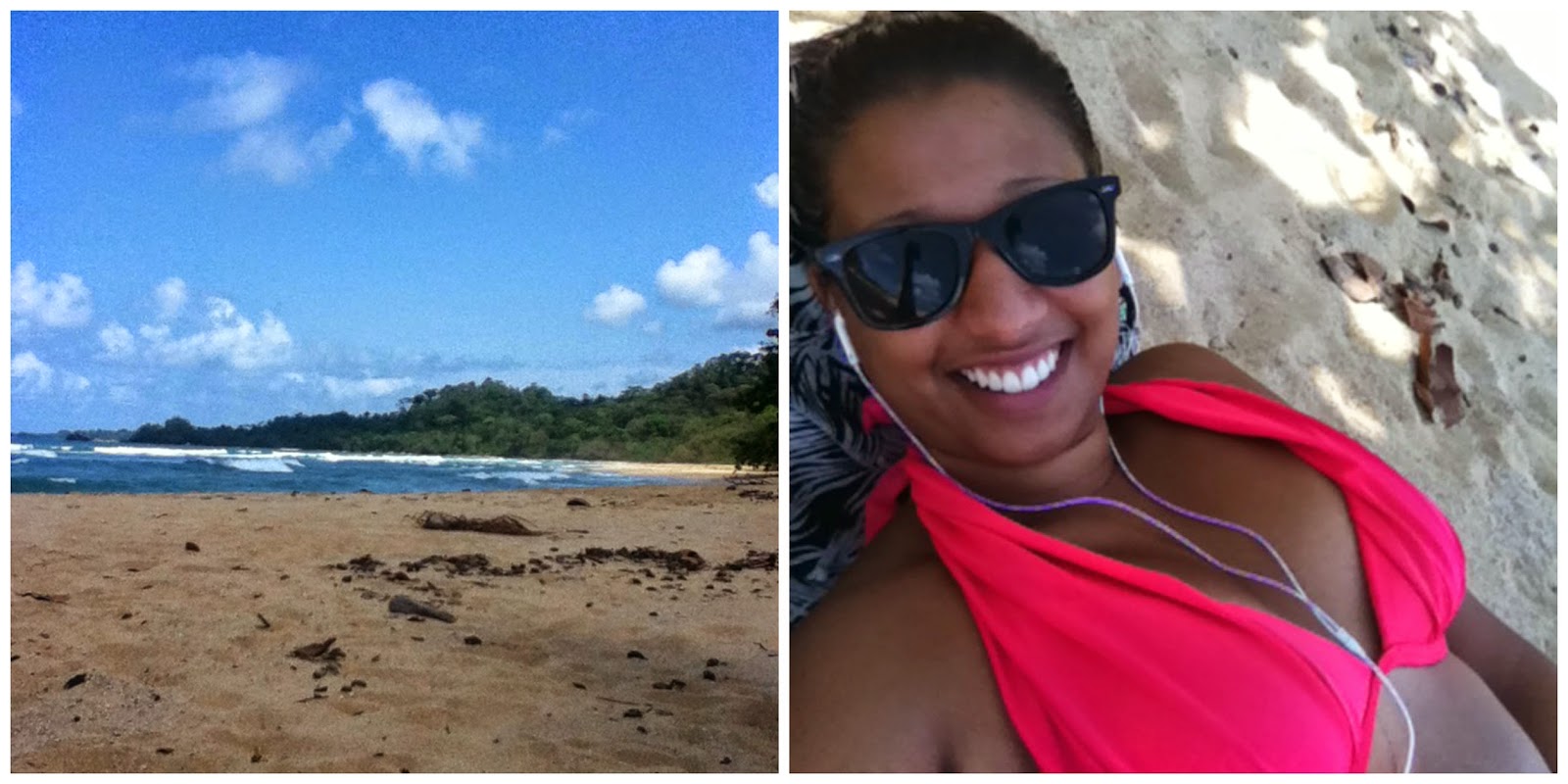 Please forgive the shitty iPod quality photo but my camera got stolen so that's all there is. Here I am smiling like an idiot minutes before it happened.
Can you tell I'm a little upset? This afternoon I had my first brush with crime in Central America (theft, technically, not robbery as I wasn't held up with a weapon). Apparently it's best not to blog while angry or emotional but for once the internet is working so too bad I'm doing it anyway.

I'm on Isla Bastimentos, a small island off the Caribbean coast of Panama. So small it has no roads or cars, the tourism industry isn't particularly built up, and I figured it'd be much safer here than on the party hard island of Colon in Bocas del Toro. These are my last few days at the beach before finishing my travels in Central America next week. I wanted to take advantage of the sand and sun so this afternoon I hiked my way out to Wizard Beach. (The internet is too slow for me to upload maps for reference so you'll just have to take my word on it.)

Wizard Beach is about a half hour trek up and over a hill in the middle of the island til you get to the beach on the other side. "It's so beautiful, you should definitely go, we just went yesterday and it was great," fellow travellers told me. Being the closest beach to me, I figured why not, I'll go there for some quiet time this afternoon as it would be my only day at the beach in Panama.

I was wearing my sandals (which already snapped and got repaired in Nicaragua) and praying that they were strong enough to withstand the forest trails. The last thing I needed was to try and do this barefoot on the way home. Literally dripping sweat, I finally heard the waves crashing and could see a clearing in the distance. A few steps more and there it was -- a quiet, completely undeveloped surfer's beach with literally five other people. As you can see in the photo above, in front of me was the water, and behind me dense jungle.

I found some shade and plopped down on my towel close to three surfer dudes who were taking a snooze. After snapping some pictures that will likely never be seen again, I tucked my camera into my backpack and put in my iPod, careful not to turn it too loud so I could still be aware of what was around me.

The surfers got up and went back in the water and it was just me alone on the beach. Or so I thought.

I was lying on a towel with my backpack under my head but sat up to admire the sea in front of me. I heard some rustling and turned around to see some little punk with a stick snatching my bag from right behind me, not even three feet away. He even took my clothing that was draped right on top of it as he ran deep into the wilderness. I hopped up and chased him, yelling to no avail, and unable to catch up as he dodged through the thick greenery that was clearly his home turf. I ran until I couldn't see him anymore, until I couldn't see the beach anymore, and all I could hear was myself making noise in the woods.

"Please, please, I'll pay you, just give me back my camera!" I cried out. I was sobbing at this point, scratched from running through the bushes, and sank into a pathetic pile crying by myself in the middle of nowhere. "Please, please...." No one was listening.

I walked back to the beach praying that at this point no one had stolen my sandals that I need to walk back to town. I had a really long ugly cry feeling very sorry for myself. My camera, my money, maybe my credit card, my sunscreen, hairbrush, room key, and clothing... gone.

In perspective, I realize how much worse this could have been, but it was my lowest point of travel so far and I wasn't ready to stop crying. I wasn't hurt, my passport was safe, and only about $30 cash was taken, but still. The tears just got worse as I thought about all the pictures from our travels so far, specifically everything from Costa Rica entirely wiped out as I hadn't loaded the photos onto my computer yet. Fortunately because my iPod was in my hand that was spared, and I left my Nikon DSLR back in the hostel. Some kind Germans came out from the pathway and found me, offered me water and even a sarong so I wouldn't have to walk through the woods and back into town in just my bikini.

Anyway, there's more to this story. I just met the guy that is the suspect. A local teenager who came to my hostel with his mother. We'll see what happens. But for now... I just want my photos back.