This time last year I was knee-deep in planning our trip to Central America. I blogged about my route through the area and one year later it’s still my most popular post! I thought it was high time to write an update for any travellers who are trying to plan an itinerary and looking for some inspiration about where to go in Latin America.

This post is filled with details about the route I actually ended up taking, what I would keep the same or change, and some tidbits of information you'll find useful along the way.

(In case you’re curious, check out my original post about our backpacking route or you can skip ahead to Part II of this itinerary.)

The Background: My Travel Parameters


Day one of our adventure: we flew into San Pedro Sula airport, took a bus to La Ceiba, and broke the bed in our hostel that night. The next morning we unexpectedly decided to fly instead of ferry to the island of Utila where we stayed for the next month.


We chose to spend so much time in Utila because we wanted to get our open water certifications and have ample time to dive (where it’s ⅓ of the price compared to Belize!). I half-jokingly refer to that first chunk of our trip as “our vacation.” We stayed in a charming guesthouse, we read all the time, and were really comfortable. The rest of my trip throughout Latin America moved at a much faster pace, which is good because I got to experience a lot, but it wasn’t as relaxing.

At the time, I was ready to move on after two weeks, but looking back on that first month I can’t deny it felt great to slow down and adjust to life on the island. Regardless of your style and how fast you like to travel, Utila is worth staying at for more than just three days. A lot of backpackers get their diving certifications here and immediately bounce but I'd recommend hanging out for a bit longer. While you're here, stuff your face with as many baleadas as you can because they're delicious, inexpensive, and you'll be hard pressed to find them outside of Honduras!


When our time was up on the island, we had a 10 hour travel day getting to Puerto Cortes, Honduras and the next morning boarded the most vomit-inducing ferry I’ve ever been on to Belize.


I loved our time in Belize. I’d like to revisit every country I’ve travelled to but realistically I know that’s a long shot. With Belize though I think it’s very likely that I’ll return. It was just so easy to travel here! Buses and shuttles run regularly, the exchange rate is simple, and everybody can speak English. (I’m sorry if that’s a “bad traveller” thing for me to say but it’s true. If you don’t speak Spanish in Central America, Belize is a welcome reprieve from always having to think in order to communicate.) There’s something for everyone here – families, couples, and especially if you’re backpacking or travelling solo – Belize has it all.

Okay, now that I’ve got that gushing out of my system let’s talk about the details. After spending three days in the quiet beach town of Placencia, we picked up my sister in Belize City and drove across the country to explore Mayan ruins in Caracol. We had such a fun time staying in San Ignacio as there’s so much to see, do, and experience in this area.

If I were to do it again I'd book things a lot sooner than one week out, try to do an ATM cave tour, and go tubing down the Mopan River. 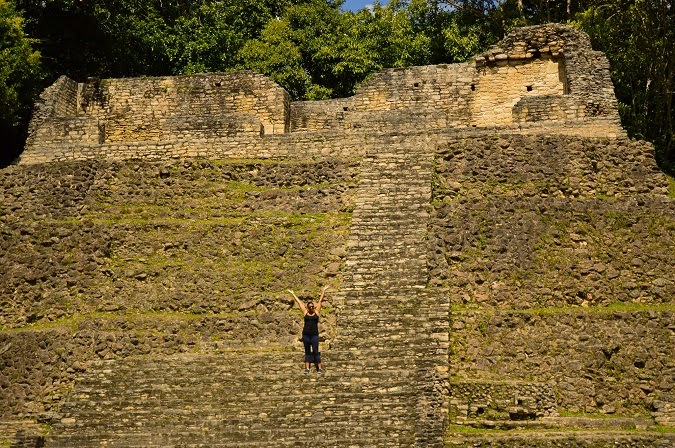 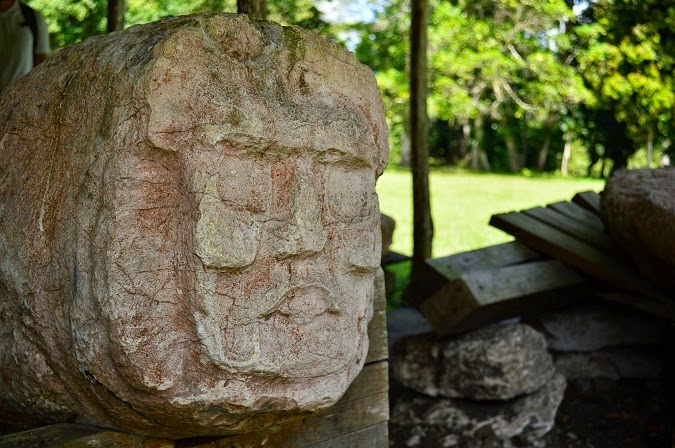 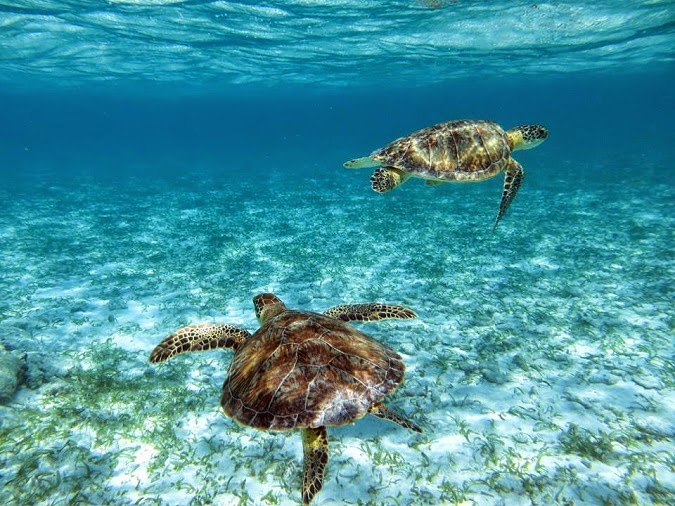 I can’t talk about Belize without mentioning the beauty of its Barrier Reef. Caye Caulker is a quick water taxi away from the mainland and I loved the laid-back vibe and lower prices there as compared to Ambergris Caye. The wildlife we saw while snorkelling around the Belize Barrier Reef was unreal, and despite my freak out in the water with sharks, I’d still call it a success.


Our time in Guatemala got off to a delayed start as protesters were blocking the roads into the country so we returned to San Ignacio to wait them out for three days. Around this time is when my husband and I had our first heart to heart about him wanting to go home. We decided to stick it out til Antigua then go from there, but first – Tikal!

Most travellers who are hoping to go to Tikal but don’t want to stay in overpriced hotels make their way to Flores or Santa Elena, but we decided to go to the quieter (and closer) town of El Remate. After exploring a biological reserve and going swimming in Lake Peten, we left our last day open to explore the epic ruins. The night before we hoped to go we both contracted disgusting cases of food poisoning. I remember being up at 3.30 am knowing there was no way I was going to make it to Tikal for sunrise. That day was one of the worst because we were so sick, in pain, hot, and disappointed about missing such a huge attraction. Because we’d already booked bus tickets and made reservations in Antigua that we couldn’t afford to cancel, we sadly had to leave northern Guatemala without getting to see the greatest ruins in Central America.

Once in Antigua, we stayed for 10 days so I could take private Spanish lessons ($6/hr). We’d wake up by 7.30 am, enjoy the wonderful breakfast that our hostel provided, then I’d study a bit before going to two hours of classes. M would meet me for lunch then we’d spend the afternoons exploring the city. I loved how walkable Antigua was! 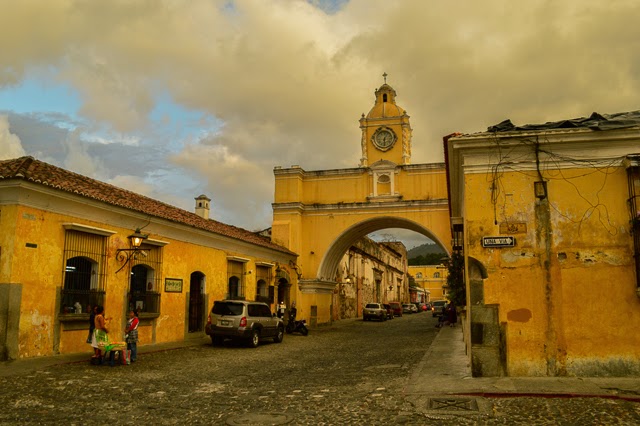 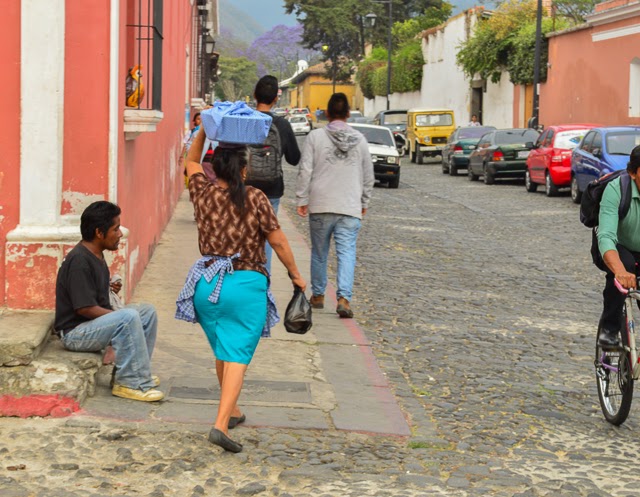 We bumped our way down some truly terrible roads for a day trip to the volcanic black sand beach of Monterrico. The waves and undertow were so strong but I have a soft spot in my heart for this beach because it was my first time dipping my toes into the Pacific Ocean. Sadly I have no photos of it because my camera was later stolen and I stupidly hadn’t transferred photos yet. I would’ve enjoyed doing some more travelling in Guatemala to places I mentioned in my original route, including staying overnight in Monterrico, but at that point it was early March and I was determined to be in Nicaragua for my birthday on the 20th. In the interest of time, I had to move on.

The next day I said goodbye to my husband as he flew out of Guatemala City and I arranged a spot on a shuttle bus to take me to El Salvador. My last day in Antigua was spent by myself wandering through the cobblestone streets, eating fresh mangoes in the park while people-watching, and snapping photos to my heart’s content. 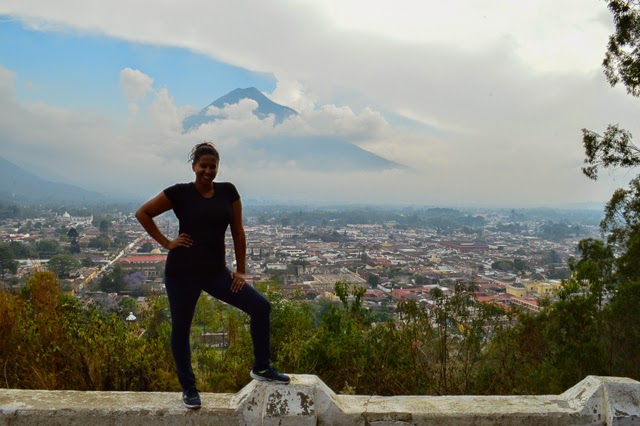 This brings us to about halfway through the trip. Next week I'll be sharing Part II of my backpacking route through Central America. If you're interested in reading about where to travel in El Salvador, Nicaragua, Costa Rica, and Panama, check back on Tuesday!

Out of curiosity I'd love to know at what pace do you prefer to travel – are you a city-hopper or would you rather move slowly? For me, if money isn't an option I like to spend at least three days in a new area and up to three weeks if I'm loving it.