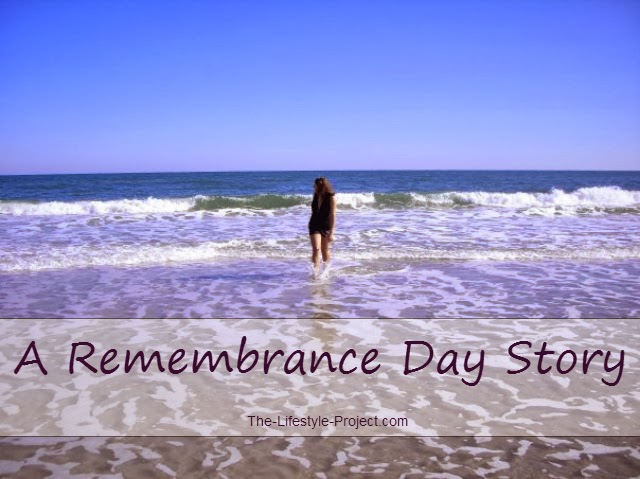 Today is Remembrance Day (or Veterans Day, or perhaps Armistice Day, depending on where you’re reading this) and every year as this date comes around, I’m reminded of a funny story from the first time Matthew and I spent this holiday together.

My husband, who at the time was my boyfriend of six months, was stationed in North Carolina and asked me to fly to the States that weekend to be his date for the Marine Corps Ball. For those who may not know, Nov. 10th is the official birthday of the US Marine Corps so this day goes hand in hand with Nov. 11th.

The USMC celebrates their birthday with a cake-cutting event which M’s unit had been notified was not mandatory. Told he’d be getting a 96er (military term for four day weekend), M made arrangements for us to get away to a beautiful suite overlooking Wrightsville Beach so I wouldn’t have to stay in the barracks (dorm rooms) with him and his two roommates. We should have known things would change though as M’s unit always had the worst luck with getting their weekend liberty revoked, but the chain of command had been notified and everything seemed fine.

We were young and in love and hadn’t seen each other in three months, so we happily drove an hour away from Camp Lejeune and spent the next couple of days literally frolicking along the beach. This Canadian girl couldn’t believe her luck with this wonderfully warm North Carolina weather!

The next morning we were eating breakfast on the balcony (I remember because it was such a fantastic meal, these delicious breakfast tacos with some of the best salsa and guac I’ve ever tasted) and Matthew received a call from his dad. He’d been contacted and told that his son hadn’t reported for work, did he know anything about him leaving, might he have taken off with his Canadian girlfriend.

M immediately called his superiors and fixed things as best as he could over the phone. “Don’t worry,” my boyfriend told me, “We’re going to the ball tonight and I’ll make it right in person. This is the first time I've ever been in trouble, I shouldn't even be in trouble. It'll be fine.”

We were already running behind when we realized that M had left his uniform back in his dorm room and hadn’t sewn on his ribbons and medals yet. He said it would only take two seconds.

It did not take only two seconds.

We got to the ball so so late. Like three hours late, missed the check-in, tried to walk in just as everyone was coming out for their cigarette break. (Keep in mind that I’m in a floor-length silk gown and four inch BGBC stilettos pulling up to the driveway in a ‘91 pick up truck. The truck was so high that I had to jump down and when jumping down the left side of my shoe ripped.)

M’s sergeant pulled him away as soon as we walked up and proceeded to chew him the eff out. I stood off to the side, making the most awkward small talk of my life with a bunch of marines who I’d never heard any stories about and who M hadn’t even had the chance to introduce me to. “So… you’re the Canadian,” they said to me with knowing grins on their faces.

We finally got inside and were so relieved to just relax. We had a great time that night despite the drama and I even got my boyfriend up on the dance floor despite our cheap selves not buying drinks from the cash bar. After a few hours we said our goodbyes and thought that was the end of the night. 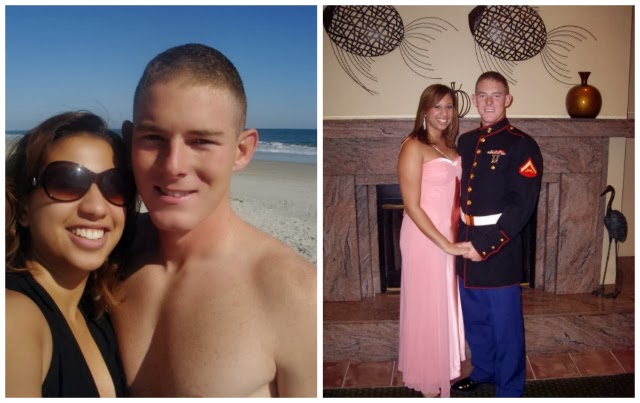 My favourite part of the story occurs on the hour long drive back to the hotel.

At this point it’s past midnight and we are starving. We hadn’t eaten anything since breakfast, accidentally missed dinner at the Marine Ball, and could not find anything open off the highway. Eventually we veered into town and passed by the neon lights of a pizza joint. After a quick nod of the heads, we U-turned into the parking lot and jumped out in search of food.

This place turned out to be a low key bar in the corner of a strip mall. When we walked inside in our formal evening wear, I’m not kidding you everyone turned around and gawked at us. It was the most what-is-going-on-seemingly-slow-motion-like entrance of my life. People began cheering and clapping for the man in uniform (and here I was thinking it was because of my dress -- ha!) and immediately approached us offering to buy us drinks. Not wanting to be rude and turn them down Of course we agreed.

They were insistently offering though, wanting to do shots together, everyone wanting to shake Matthew’s hand. (Now that I’m writing this I realize maybe this whole setup was a ploy from the very beginning with the hopes of impressing me with this display of pride and patriotism. Hmmm…) Anyway, I took the keys from Matthew and let him step forward to accept all the beer and whiskey that was flowing his way. After the 15 minutes it took to make our pizza we said goodbye to a very friendly bunch of no-longer-strangers and made our way back to the hotel.

The night came to an end with pepperoni, bacon, and sausage pizza in bed, arms around my Marine, laughing about how the day had come to be. These days, whenever I think about Remembrance Day I smile and remember this story about my veteran from five years ago. I feel very thankful to have the life and liberties that I do. Thank you to all those who make the sacrifice to protect our freedom.

Linking up with Happy Medley.