An Adoption Story: Our Family of Three

Yes, that is totally a clickbait title but it is in fact true — we’re so excited to announce that we’ve added a third member to our family!

Everyone say hi to the sweetest girl with the softest ears in the world, our little Lexi. 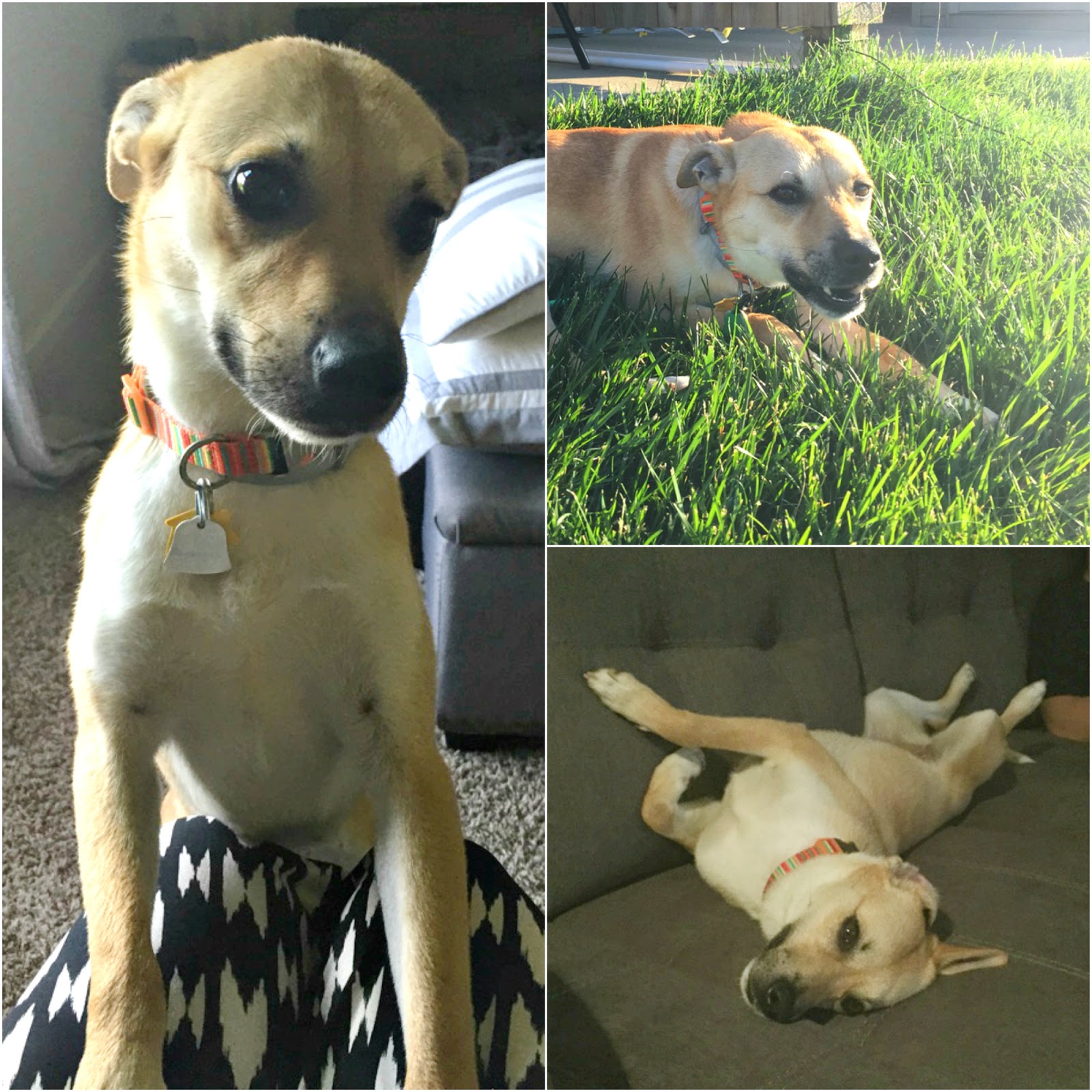 Lexi is a rescue pup who spent the first year and a half of her life in a wooden box. It’s hard to believe that I just typed that sentence but unfortunately there are some horrible people out there who are not fit to own pets. A neighbour reported Lexi’s abusive owner to the police after she witnessed dogs in the yard who were chained up outside throughout the entire winter.

Animal Control was finally able to save Lexi on a cold February day. It was 12F (-11C) and Lexi was alone in a simple wooden box without any source of warmth and without any food. She had a five gallon bucket of water that was obviously completely frozen over and she was shivering so violently she had trouble standing.

Stories like hers are what made my husband and I want to adopt in the first place. Once I learned that I was moving to the States and we’d be getting a townhouse, we knew that we wanted to bring a dog into our family but we didn’t know how we wanted to do it. Going through a breeder has its advantages depending on what you’re looking for but the more I researched local rescue groups and shelters the more I knew that adoption was the right choice for us.

Last week we decided to spend an evening at the county animal shelter. It was my first experience at the pound and I had no idea what to expect. We signed in then were free to roam the kennels by ourselves.

We stumbled upon Lexi hanging out quietly in her crate. We were immediately drawn to her energy. All the other dogs were (understandably) freaking out — pacing, whining, barking to get our attention. But there was Lexi, sitting and alert, with a tail that wagged excitedly the longer we stayed by her side.

We could tell that she was not only shy; because of her beginnings Lexi is a scared and timid girl. It’s part of what comes with adopting a rescue dog, I suppose. We didn’t want to overwhelm her so it was perfect timing that a volunteer walked in right then (side note: the volunteers at Animal Control were so knowledgeable and passionate about their work — thank you for being awesome!). After some time hanging out with us and people that she knows, we were able to build up her trust enough to lead her outside for a short walk. Lexi warmed up to us quickly and we were thoroughly charmed by her sweetness, her story, and her eager-to-please disposition.

Between my husband and me, I’m the more analytical one, so I was willing to visit other shelters and take some time to deliberate. Before going to the pound, we took the pressure off ourselves by agreeing that we were in no rush and wouldn’t come home with a dog that night.

Well, I think you know how the story ends.

Before we even reached the car, M turned to me.

“I want her. She's perfect for us,” he said. “There’s no need to keep on looking. We found a dog that’s exactly what we want. Let’s adopt her.”

Adopting a dog is a huge decision. I mean, obviously I know this, but maybe I shouldn’t say obviously because some people treat it like it’s no big deal at all. Dogs live for 10+ years! You don’t just have them for a few months. While we were at Animal Control, we witnessed two separate people surrender their puppies because they “just couldn’t handle them anymore.” I can’t tell you how many Craigslist ads I read where people said they “don’t have the time she deserves” and were trying to get rid of their pets. For a $300 “rehoming fee” of course.

Ugh, I’m getting fired up here. The air quotations are coming out. Let’s go back to talking about good things.

So there we were in the parking lot with M looking at me. His eyes were full of hope and so sincere. I just knew in my heart that we could give Lexi a good, loving home. And M was right — there was no need to shop around for anyone else. She fit all our criteria.

We gave each other a kiss and squeezed hands.

Then we walked right back across the parking lot and in through the doors marked Adoption.

Because of her past, Animal Control required an in-home inspection to make sure that Lexi would be living in good conditions. The couple who tried to adopt her before us admitted that their landlord didn’t allow them to have pets so they were going to give her away for a bit until they found a new place to move.

(Honestly, sometimes I just. can’t. even.)

Everything worked out for the best though because their loss was our gain. The next day the director of Animal Control came by for a visit and showed us the photos and video from when Lexi was recovered. She officially approved our application and Lexi was scheduled for spaying. We picked up our new dog on Monday and things have been freaking amazing ever since.

Lexi’s done remarkably well under Animal Control’s care but we still have some rehabilitation work to do.

Oftentimes when we go outside she reverts to a fearful state and freezes on the spot, refusing to take a step further.

Being a small dog and only recently getting fixed, she’s used to big dogs pursuing her and has developed a bit of dog aggression.

Sometimes it’s even as simple as raising my arm to turn on a light switch and seeing her immediately cower and flinch.

It breaks my heart to think about what happened to Lexi to make her so fearful but all we can do now is live in the present. We’re trying to be the best dog parents that we can be and Lexi has already improved so much in the three days that we’ve had her. 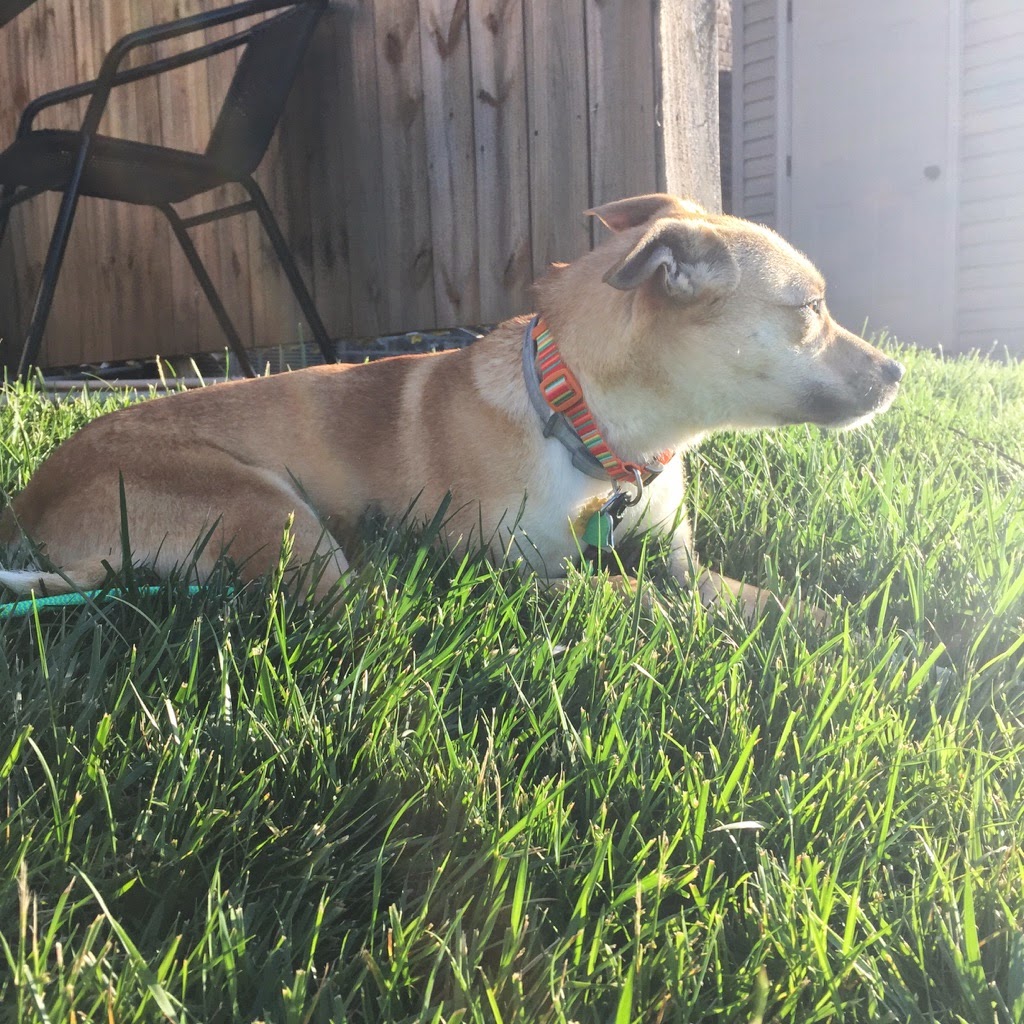 Oh, and the asshole that abused Lexi in the first place? He’s facing charges in court for animal cruelty but just skipped out on his bail. Let’s hope that karma catches up to him and he gets what he deserves.