An Ode to Quitting

“I should be doing more, I should be toughing it out, really we are talking about first-world problems here, it’s not like I’m being tortured or anything. I should just take my paycheque and be quiet,” I argued to myself the night before I quit my job.

I seemed unable to shake this ever-present guilt and doubt about following through with my decision. Logically, I knew I was fully justified in my reasons to quit and recognized it was time for me to move on from the company. This is not the life that I want to live. Am I an irresponsible person or a selfish wife for leaving a stable position to jump into something unknown, something new? What if I landed flat on my face while everyone else around me continued to take off? Would I regret this move if it turned out to be a huge risk that didn’t pay off?

Not at all. The answer began as a whisper but transformed into a too-strong-to-ignore response as time went on. The thought of another six months, far less two more years, made me want to jump out of my boss’ window arms flailing in the air behind me (my position did not justify an office, far less an office with a window, as my manager liked to remind me). Seeing as how his office was located on the first floor, I opted to avoid the decidedly overdramatic yet underwhelming exit and just hand over my resignation letter instead.

People leave their jobs all the time, it’s not that big of a deal! You’re young, it’s time to move on, you’ll be fine. Why do you feel so guilty about quitting?

Remember when you were working that awful summer job in retail and your co-worker turned supervisor reared her hypocritical power-hungry head the second she got promoted? She began to chastise you every time you worked together then she started pulling Mean Girls-esque drama at work and reprimanded you (loudly) on the floor for something she did herself. During that drama a shoplifter stole hundreds of dollars worth of merchandise and again that supervisor tried to blame you. You wrote your resignation letter on the register receipt paper and, for the first and only time in your life, quit on the spot. That felt pretty good.

Then there was the time you quit your relationship with that guy you were dating because he was always paranoid that you were too good for him and you’d leave him for someone else. You had to assure him of your feelings every day and that shit got annoying real fast. Being jealous and controlling are not good characteristics of a healthy relationship and you trusted yourself to jump ship when it became necessary. That was a smart move.

Or, as minor as it was, how about that time you quit subscribing for your overpriced cable TV service and cut down on your other household and shopping expenses so you could build a savings fund to go backpacking for four months in Central America? That was only a small act of quitting but still it felt pretty satisfying.

These are a few examples of times that you quit and they turned out to be for the best, when you were listening to your gut and you were right. You trusted yourself then, so trust yourself now. Quitting doesn’t have to be a bad thing; it simply means you’ve changed your mind.

Despite the reliable paycheque, you know that you were not put on this earth to work in a windowless grey office nook day after day and listen to your hallway neighbour’s cackling laughter and passive aggressive comments, freezing in air conditioning while sitting at your desk under fluorescent lights doing business-like things to make money for people who didn’t always treat you very respectfully and whose office politics left you with an unfortunate reminder of what high school frenemies were like.

In fact, after much introspection you now know that the deepest issue was not that job in particular but the idea of never being free to pursue other passions and possibilities because you were too busy making money for somebody else on their terms to pay your bills, living for weekends and your 10 days of vacation each year, until you could finally retire and go explore the world. Remember that soul-sucking feeling that would sometimes overwhelm you driving home from work at the end of a long day when you couldn’t see an end in sight for yourself? How gut-wrenchingly sad you would feel knowing you had to go back in and do the same thing all over again and again? Some call that sort of permanence “security” but it felt decidedly more imposing to you.

Quitting means being brave enough to recognize the warning signals before those aspects of your life become sources of long-term unhappiness. 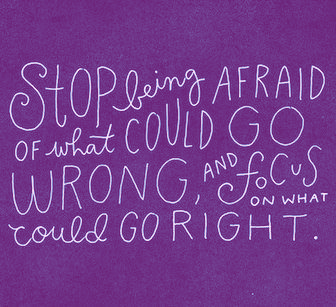 Let’s talk about that time you were introduced to an American Marine from Tennessee who, on the first weekend he met you, pledged that he would move to Canada for you. You just had to date for two years in an across-the-world-long-distance relationship then decide who would move to the other’s country, but then you’d be able to be together. Something made you say yes and things turned out pretty well. In fact, you ended up marrying that guy, so maybe you know more than you think.

So here’s to change and following the path that will bring you growth, fresh opportunities, inspiration, and contentment. Cheers to being brave enough to listen to your heart, even when that means going against the norm. Maybe you don’t have to make sense of every maybe right now. Just wake up tomorrow and shake off the guilt, then say those two magic words.